In the summer of 1990, I traveled to Beijing and spent two months studying Chinese language as an ABC (American Born Chinese), and traveling around a country I had never visited before, except through the stories of my mother as a little girl in Shanghai.

While many things were not strange and new, such as the sound of Mandarin language, and the smells of Chinese food as it hits a heavily-oiled wok, one experience that stands out to me is how the Chinese prepared for meals on a day-to-day basis.

Most families in the city are composed of a mother, father, and one child, with grandparents also living in a small apartment. Even smaller is the cooking area, as families tended to eat at their local neighborhood’s shared kitchen, an cantina of sorts. Each person received a ration of food for these common meals, and anything you wanted that was extra had to be cooked fresh and eaten immediately. Families with either more wealth, or foreigners, had a refrigerator and freezer, but most did not.

Additionally, the Chinese have a long-standing tradition of accessing local open-air markets open at all hours of the day and night for people to buy food. We don’t even call them farmer’s markets, although that’s what you would call them in America. They are just markets that aren’t in a building and air-conditioned. We value fresh produce, fresh fish and meats, and hot food over items that you store in a larder or put away in a plastic tub. Even in Taiwan, people still value eating freshly prepared meals daily and deep into the evening. It’s not unheard of to see families eating dinner after 9 pm.

You can imagine what this kind of set up does to the Sensitive Celiac.

I had heard about how Batch Cooking was the way to go if you must cook most, if not all, the food you consume in your own kitchen in order to keep your food safe and free from cross contamination. There are videos on batch cooking, recipe books that include sections on how to menu plan and organize for large-quantity cooking sessions, and I’m pretty sure there are even classes you can enroll in that teach you how to best execute batch cooking sessions.

Yet like many things, I want to make food fun again (that is my motto here)! Making food fun again means keeping a playful spirit and approach, experimenting and being willing to make mistakes and learn from them, and then enjoying what progress is made. I figured, AFTER I had tried at least one session of batch cooking on my own, I’d turn to the professionals who have done it many times and over many years, and incorporate their secrets.

The Prep: A Clean Kitchen

First, you’ll want to start with a clean kitchen. Man-Geek left me with a sink full of dishes (we’ve both been so busy, so we’re both to blame), so I started in by clearing precious counter space and making sure that all the tools for cooking that I might need were clean and ready to go.

Storage Containers and Tools, Oh My

Three kitchen appliances that I find indispensable for cooking large amounts of food are my Vitamix blender, my InstantPot (Love x3), and my Cabelas dehydrator. I made sure these were all clean and dry.

Phone Camera and a White Board, FTW!

Select five to eight kinds of foods you would like to make the foundations of and store. These should be foods that are all safe for you to eat, and these foods might be related to each other (so there is no waste of food). 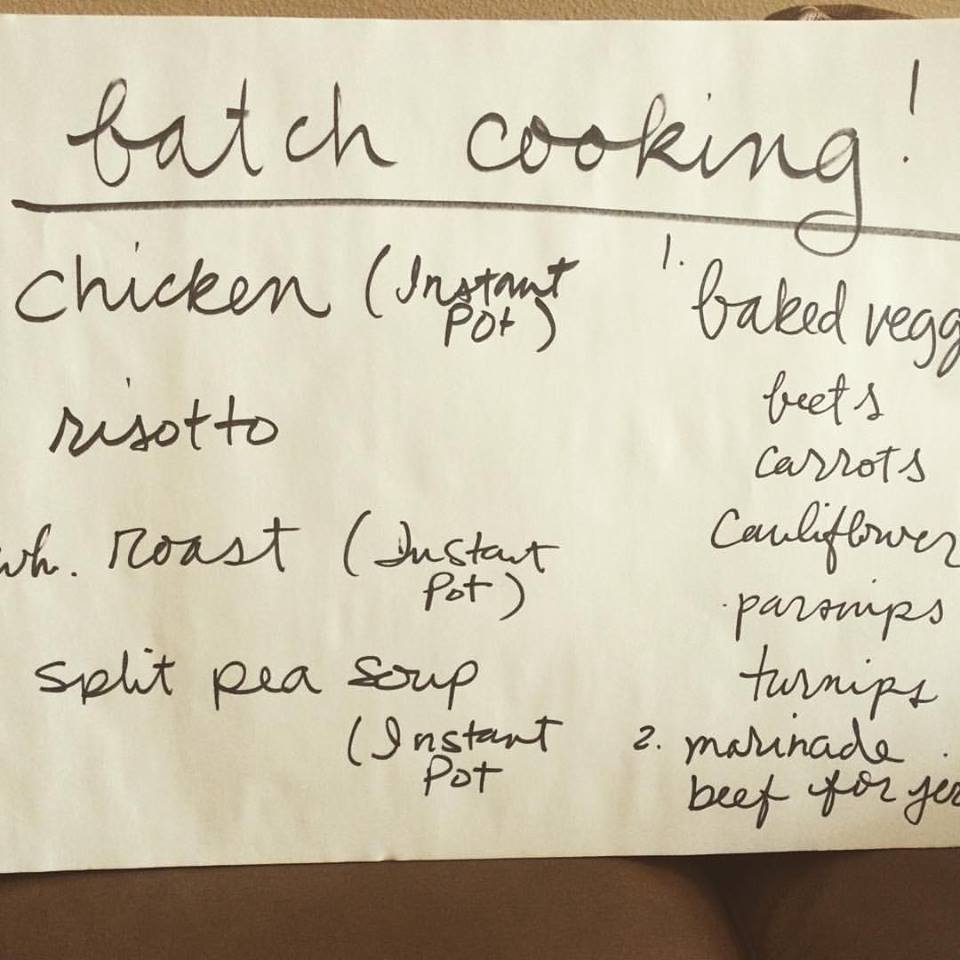 Use a poster board, white board, or flip board to “chart” the dishes you’ll be making. Don’t think about individual meals as much as basics that you can pull meals together from in variety of configurations.

Once I knew what foods I wanted to make, I wrote down a shopping list on a white board and snapped a photo of it on my iPhone. iPhone and I went to Whole Foods and QFC, picking out all the vegetables, meats, spices, and anything else that I didn’t already have in my pantry.

This method is nice for tracking and archiving what you eat over time. It’s easier to see and store these in digital form than on disposable paper shopping lists.

My countertop space is only so big, so that any given time I could be cooking about three things, tops. Perhaps I’ll invest in a second InstantPot! It certainly would save me time.

I wrote all the foods I wanted to cook down in two columns on my flipboard, indicating that while something in Column 1 was cooking in the InstantPot, I could be chopping vegetables or marinading something else in Column 2.

The hardest part to coordinate was for the InstantPot, the star appliance in my kitchen for the day. Preparation involves having space to clean it after you’ve removed the cooked food into containers. I had a pile of filled containers that were cooling with hot food inside them, and you don’t want to put those in the refrigerator until they are cooled. I did set some food containers on a smaller table to free up counter space. 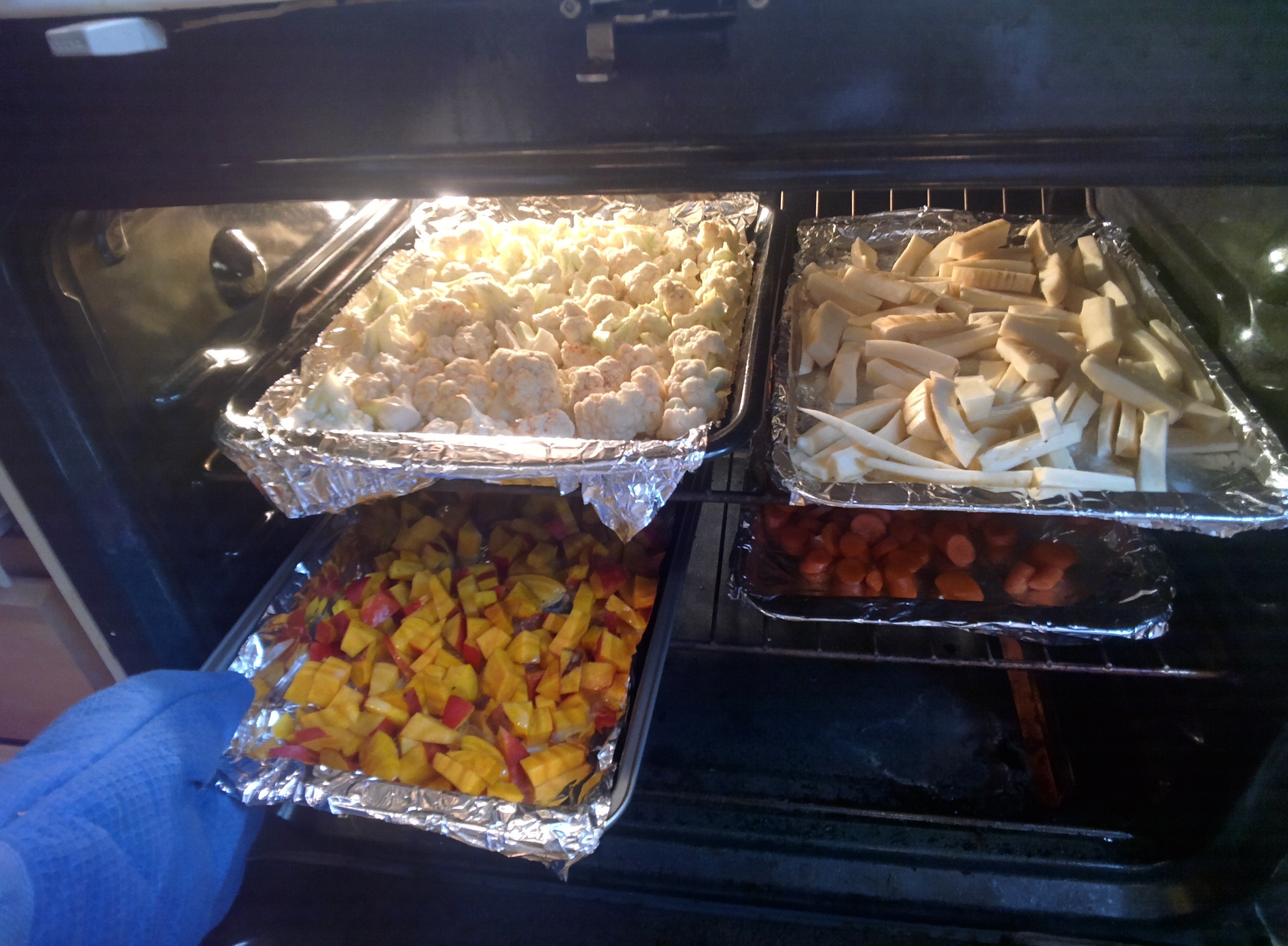 When batch cooking, use all the available space in your oven that you can. That will definitely save you time. Don’t worry; they will all cook evenly.

For easy clean up, I line baking pans with aluminum foil before creating a layer of vegetables for roasting. After pouring a small amount of melted coconut oil on the vegetables from a glass measuring cup, I just use my hands to mix the veggies with the coconut oil to ensure that everything gets coated. Then you can sprinkle your salt, pepper, or other spices on the tray.

The order of making the foods may be influenced by something further down the list that needs a finished ingredient from something at the top of the list. For example, I wanted both the risotto and the split pea soup to use chicken broth from the whole chicken, so I cooked the whole chicken first. It took twenty-five minutes to cook, so while it was cooking, I chopped vegetables, arranged them on baking trays covered in foil, and roasted them in the oven for thirty minutes.

When the chicken was done, I transferred the chicken to a cutting board and drained off the chicken broth to a container for the risotto and split pea soup. The vegetables went into the oven for cooking, the Instant Pot was cleaned, and then I cooked the allium-free risotto.

When the chicken had been deboned and its meat placed in a storage container, the risotto was also finished. Again, I cleaned the InstantPot and cut the three-pound beef top round roast for cooking in the InstantPot. While the beef was cooking, the vegetables were done and ready to be put into storage containers as well. When the beef was done, the InstantPot was cleaned and readied for cooking the split pea soup, and using a few scoops of the chicken broth plus hot water and spices, it was soon ready to cook.

I had some leftover cauliflower from the first batch of vegetables (I bought enough vegetables to make two large batches), so I put it in the Vitamix with a small amount of water, rice milk, spices, and collagen for protein. Five minutes blending at high speed actually begins to cook the liquid into a really nice soup, which I slurped up between InstantPot cleanings.

Finally, I took the bones and fat from the chicken, added water, and re-cooked them in the InstantPot for another twenty-five minutes. As expected, it created a solid amount of chicken broth to use another time. 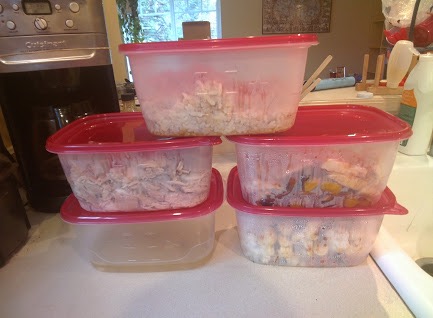 When you finish batch cooking, make sure you have enough room in your refrigerator or freezer for all the food you have made.

The final food that I had purchased for batch cooking requires marinading overnight — my beloved beef jerky! I decided to leave that for another evening, as I tend to let it cook in the dehydrator at a lower temperature through the night.

All the rest of the cooking happened so quickly, I thought that maybe I could make one more thing. Hmm, what should it be?

Cranberries! I absolutely adore fresh cranberry sauce with turkey or roast beef. It is also very lovely with bacon! In went two packages of fresh cranberries into the InstantPot, a half cup of sugar, water, and I guessed that it would take at least eight to ten minutes to cook (I like mine a bit mushy). You can get fancy and add frozen orange concentrate or organic orange extract; I was even thinking of a little dried lavender, ooh la la! 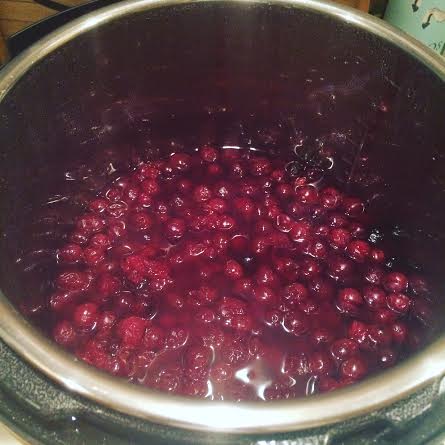 Yes, you can cook cranberries in the InstantPot in five minutes, no burning, no needing to watch it.

From batch cooking, I learned that I didn’t need to waste so much food or so much time. When I try to cook every day, I get too exhausted. Exhaustion tends to set me up for poorer choices (in my case, I fail to eat enough food, and lose weight quickly), and my meals are a bit less balanced. But if I have the foods readily available, I will construct more balanced meals.

The limitation is that the meals of the week are coming primarily from the same eight containers, with the exception of my breakfast, since I like cooking my breakfast fresh daily as part of my morning routine. I’m experimenting with buying one grocery bag of food for lunchtime salads that I take directly to work and construct in my office floor’s shared kitchen; I have a dedicated drawer in the refrigerator that is unclaimed. Lunch then becomes time to get in an extra serving of greens in the form of a mixed green salad, plus olives, goat cheese crumbles, sunflower seeds, and meat of my choice.

Each week’s batch cooking can rotate the vegetables, soups, and main dishes so that I’m not eating exactly the same things every week. And of course, I like a vegan meal here and there, and a fish meal at least once a week that is cooked fresh.

I’d say this adventure in batch cooking was a success! If you do batch cooking, please share with us a picture of you in your kitchen, and your favorite ingredients to make into a week’s worth of nutritious food.