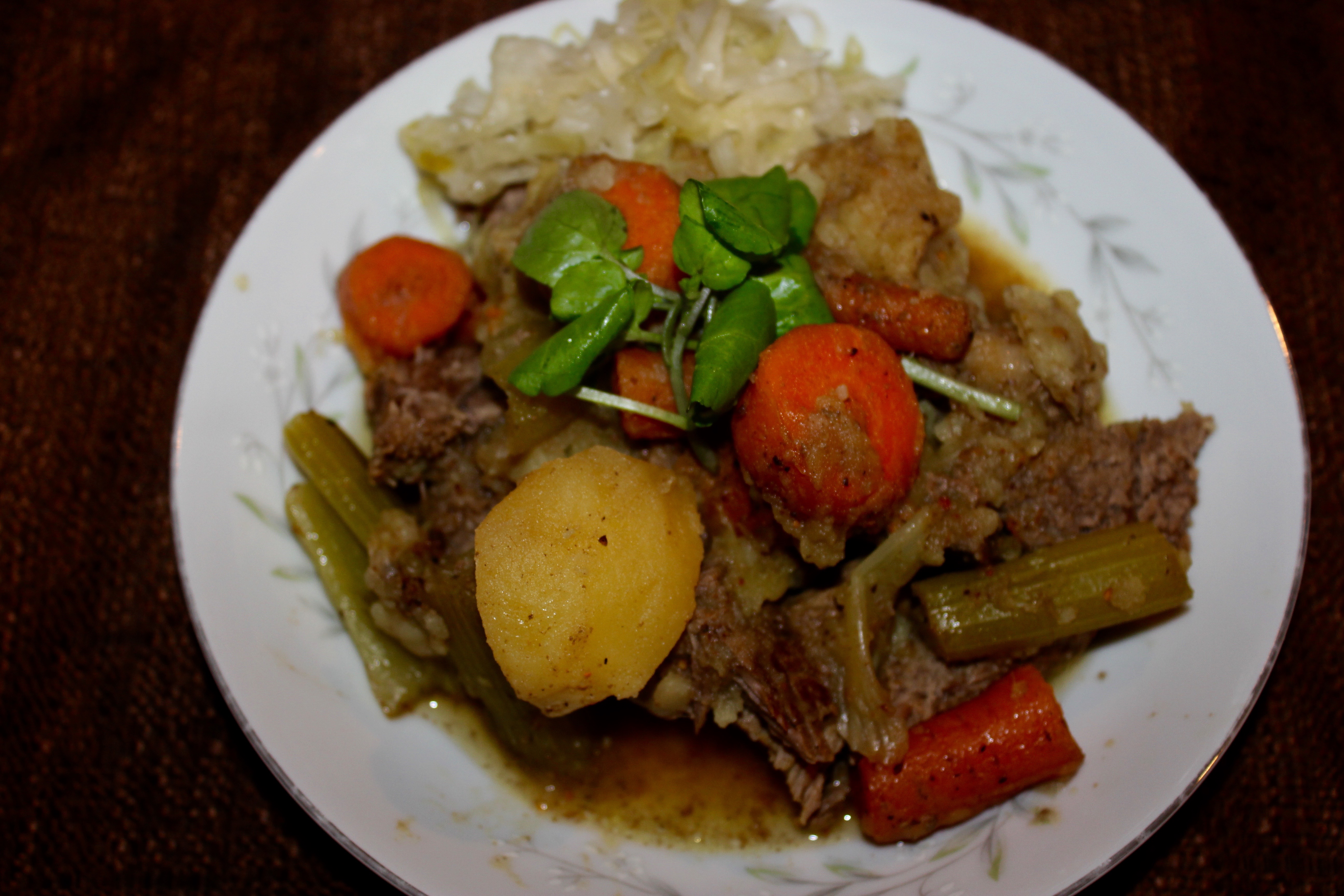 Have you had Beef Stew made at home in less than 35 minutes, but it tasted like slow-cooked goodness? If not, here’s how!

During a visit to my mother’s kitchen, I was surprised to see an old ‘frenemy’: a stove-top pressure cooker. It’s one of those heavy steel monstrosities that require two hands  to lift it when it is full of food and liquid, and a dowel or rolling pin to awkwardly hammer sideways  on the lid to open it after the steam is released. Mom would fill this old pressure cooker with pig’s feet, soy sauce, garlic, and anise, and within the hour, the house would be filled with the rich smell of that licorice anise and soy sauce.

The step requiring the release of  pressure is that frightening memory of the kitchen that still makes me feel ill at ease. Mom would instruct us kids to step back far away from her, and with a heavy dish cloth or protective oven mitts (and sometimes both!), she would turn the weighted pressure regulator to release the pressure, and the noise of the pressure, with its tail of air rising into the kitchen as the regulator danced on the lid, gave me the jitters. My little girl heart must have made a decision, then and there, to never use one of these pressure cookers when I grew up.

She smiled. “I keep it, but I haven’t used it for quite awhile.”

And without her saying much more, I understood why. Pressure cookers kind of have a bad rap. They are clunky. There are tons of stuff you have to read about safety. The idea of something blowing up in your kitchen is not appealing!  In the news, you see the words “pressure cooker,” and you immediately think about bomb scares. On the other end of the the slow cooker movement, we have charming ceramic slow cookers with three settings – high, low, and warm.  While you can achieve similar results with a slow cooker,  you have to wait a minimum of five hours to enjoy them. And you need to stick around, at least when you think the food will be done, to turn it down to the “warm” setting, lest your food be turned into overcooked mush.

That day in Mom’s kitchen, I wondered about one of those silly infomercials I had seen on television for a fast pressure cooker. My kitchen already has a  large-sized Zojirushi rice cooker, which is a glorified steamer that plays a start and finish song for your rice. Why not a stand alone, fast pressure cooker that keeps your food warm after cooking, and doesn’t require you to attend to it after you press the ‘ON’ button and fill it with food?

An InstantPot Lover Is Born 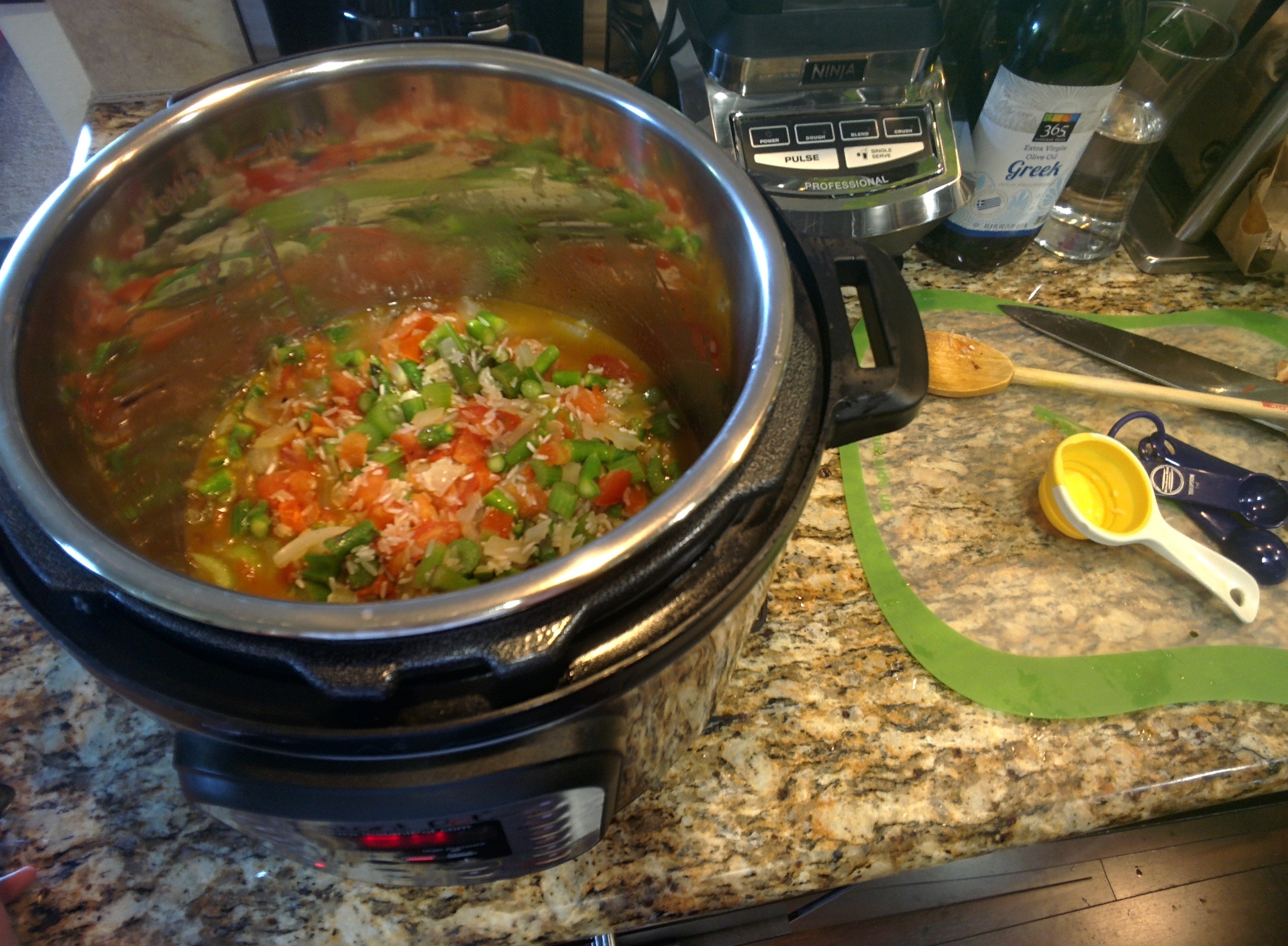 The InstantPot in action at a friend’s home. It’s a great way to be able to cook in someone else’s home without worrying about cross contamination issues.

My friend Amalia, who you will be hearing more about as you visit this website, told me that she had been using an InstantPot for years. Of course, I snickered at the name (we live in Washington State, where marijuana has been legalized), but I was secretly fascinated. Could it really be used to make steamed rice, cook stews, make non-dairy yoghurt, prepare bone broth, and all the other foods I was interested in making Imei-safe versions of on my Celiac and food allergen free nutrition plan? I wanted to find out!

“Beep boop beep,” went my fingers on the laptop keyboard, and Amazon shipped me my first InstantPot, replete with Chinese recipes (in Chinese, no less!). I decided that we would start simple, with a classic Beef Stew recipe, and then add a twist that I know you will enjoy.

For the record: all my recipes are: Gluten free, Soy free, Dairy Free, and Corn Free.

If you are following the AIP (Autoimmune Protocol), I will try to include some options at the bottom of the recipe for you to try as a substitute, and there may be changes to recommended cook time or prep notes. In the future, I’ll mark AIP recipes at the top of the post or in the headline, so they are easier to find. 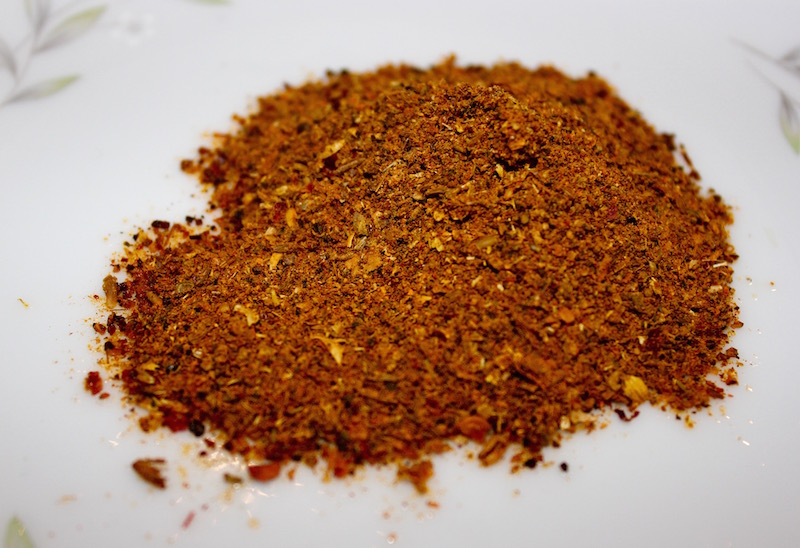 El Ras Hanout is a Moroccan spice mix that can add old world flavor and exoticism to a classic beef stew recipe.

I discovered the Moroccan spice El Ras Hanout (which means, top of the shop), when I went on a trip to Morocco in 2007. I was dying to try some authentic Moroccan food cooked in a tagine, and if you think about it, the pyramidal shape of the ceramic cookware, it’s just another kind of slow cooker for the oven. One of the spices I fell in love with are the traditional twelve spices of El Ras Hanout. According to Wikipedia, the twelve spices include:  “cardamom, cumin, clove, cinnamon, nutmeg, mace,allspice, dry ginger, chili peppers, coriander seed, peppercorn, sweet and hot paprika, fenugreek, and dry turmeric.”

Hello, can you say, “Welcome to my mouth?”

I sourced my spices from World Spice Merchants, which is a really good thing now that I discovered I have some new food allergies that can be commonly found in certain spice mixes. I was able to determine that my spice mix does not contain dried alliums nor nuts. Phew! Game on, let’s eat!

If you are following the AIP, I am sorry to say that the peppers used in this spice mix are not going to work, nor the potatoes. Instead, I would buy the spices you can have separately, grind them in a mortar and pestle, and start with mixing equal parts of the less “hot” spices first. You will then add salt to your mix, as the hot spices, such as paprika, mask most of the need to add salt for flavor.

This beef stew recipe is easy to make at home. The key is to cook the meat most of the way first, and add the vegetables in the final five minutes of cooking in the InstantPot. It’s a great food to have around when family members are eating at different times, and it travels well in a lunch box to take to work.

2 lbs top round beef for stew, cut into quarters

4 medium carrots, cut into thick chunks (I like my uneven and anti-industrial)

garlic and onions, chopped, to taste (I leave these out of mine)

Add oil to the Instant Pot or fast pressure cooker pot, and turn on the Saute setting. Using tongs, settle the four quarters of beef in the hot oil, searing them on all four sides for five minutes. There should be both oil and liquid from the meat at the bottom of the pot. Place the lid on the InstantPot and make sure when it’s closed that the vent setting is in the proper “closed” position for cooking. Set to “Manual” and 17-20 minutes cook time (less if your beef is already cut into small chunks; 12-14 minutes may be enough).

While the meat is cooking, chop the vegetables and set aside. Now, you’ll probably have fifteen minutes to yourself. Color. Pet your cat. Take a nap. Play the ukelele. Browse the Internets. Run an errand. The InstantPot is safe to leave unattended. I love, love, LOVE that!

When the meat has finished cooking, carefully unvent the InstantPot, and when it’s ready to open, add 1/2 cup water. Sprinkle the El Ras Hanout spice on top of the meat.  Add all the vegetables on top. Set the InstantPot for five minutes; seven if you like your vegetables soft.

When the timer indicates cooking is done, vent the InstantPot. When venting is finished, open the lid carefully, letting out any remaining steam. With a long spoon, stir the contents carefully. Bringing the beef quarters up to the top. You may wish to take a knife and fork and pull the meat into smaller pieces, or remove the meat quarters to a cutting board and gently slice the meat before returning it to the pot.

Serve piping hot, as is or on a bed of brown rice.

While stew can be looked at as a messy food, I personally like to arrange the stew in a shallow bowl over a bed of rice, taking care to arrange the vegetables and meat in such a way that every single bite has a little of each ingredient in it.

The InstantPot keeps food warm for up to ten hours. However, I find that if the vegetables stay in the InstantPot on that setting, they will tend to be mushy, even with very little liquid. Instead, transfer any leftovers to a glass bowl with lid, and refrigerate. It heats up pretty well in the microwave.

Post-script: I told Mom all about my InstantPot after I bought it. She sounded skeptical over the phone, but she texted me the next week: “Guess what? I bought an Instant Pot. Did you know they have Chinese recipes in there?”

AIP: Potatoes are usually not consumed if you are on the AIP. Instead, I would try a medium-sized head of cauliflower, separated into its florets, and placed on the very top of the InstantPot above all the other vegetables. Cook time will likely be closer to five minutes.

If you are able to safely consume rice, a small bed made of a 1/2 cup of brown rice is just the right amount to place on the bottom of a shallow bowl and ladle. Add a dash of salt.