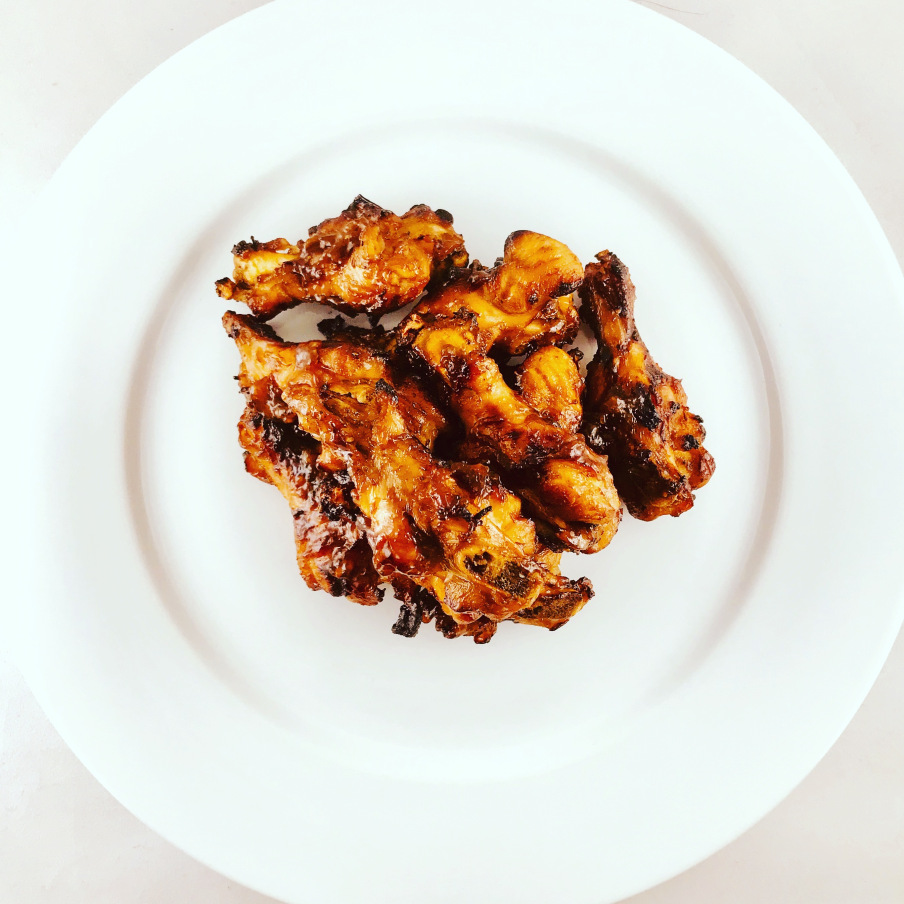 Because of the ingredients added to most sauces for hot wings, I haven’t had a decent one in years. Why shouldn’t we have a go-to party food that is a healthier, safe option? Photo by Imei Hsu.

Hot wings and drummettes are so popular, they have whole restaurants dedicated to these delectable, finger-lickin’ nibbles. When I began to plan a light menu for a party at my artloft that fell on Superbowl weekend, I just knew that I had to come up with an ” I can have these!” version of hot wings.

I prefer little drummettes or even small chicken drumsticks instead of wings, as it seems that for all the work it takes to eat wings, you get a big pile of chicken bones and very little chicken meat for the energy expenditure. With drummettes and drumsticks, you hold the bone with one hand and nibble around it like holding a handle, and then you’re done. Wings are a two-handed affair. I always end up with chicken juice on my nose. Ew!

Still, any food that requires moistened towelettes for clean up should be on a list of party food favorites, and if you’re like me and you can’t have any food that was poured from a bottle — well, there goes that amazing BBQ sauce, the fiery hot sauce, Sriracha sauce, soy sauce and tamari sauce (because you react to gluten AND soy), even some of you can’t have coconut aminos. You also can’t have dairy, which would make the sauce creamy if you could add butter. And you can’t have cornstarch, which would give the sauce a thickness that you miss when you imagine a rich sauce. It’s just a whole lot of NOPE.

Are you salivating yet? I was when I said, “It is time!” and committed to create a sauce that the majority of us Hungry Minions could enjoy. And I have done it! You’re welcome!

First of all, I reached out to The Big Apple Mama blog owner, Irina, when I came across her recipe using the InstantPot, because I just knew that someone had to have come up with a decent process of getting a nicely seared flavor yet with tender meat. She immediately wrote back to me after I explained that I wanted to give credit for her cooking process, but that I could not use her actual recipe because of my food restrictions. Irina gave her express permission to link her recipe to this post, so you can see what’s similar and different between our recipes. Thanks, Irina! 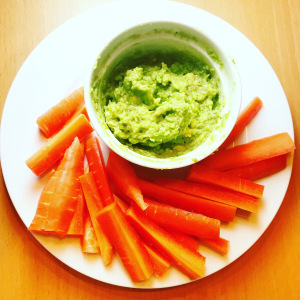 Serve with simple raw veggies and mashed avocado without additional spices. No need for salt or pepper, seriously. Photo by Imei Hsu.

Below, a second sample using smaller drumsticks (I told you I like more meat, so when you want to serve them as a main dish, drumsticks work fine too). 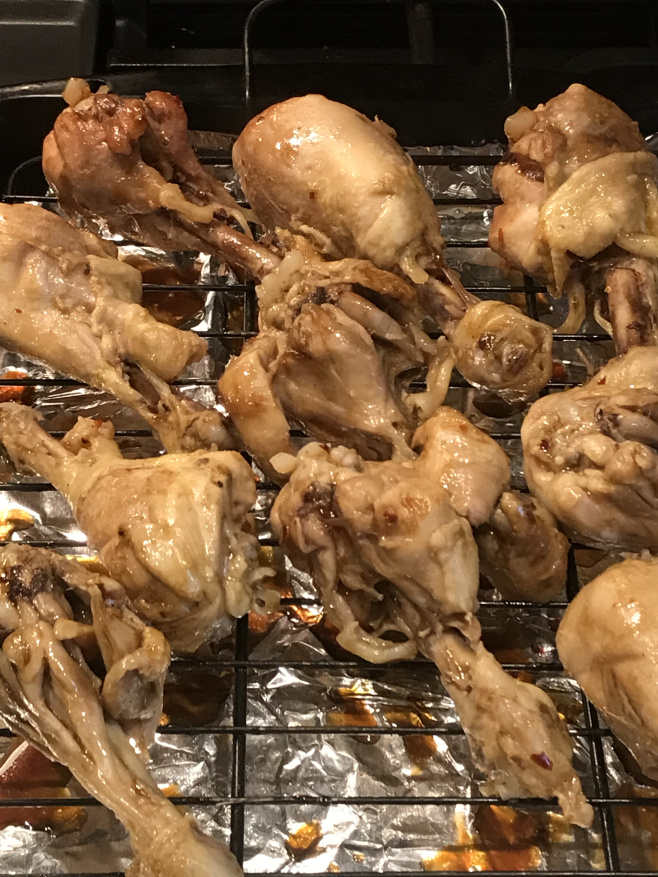 Drumsticks instead of drummettes, before being broiled in the oven. Photo by Imei Hsu. 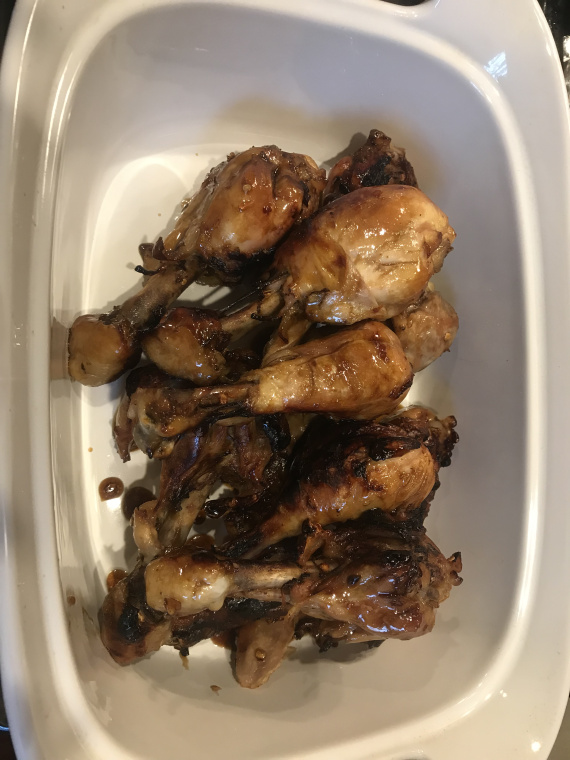 Drumsticks basted with sauce after broiling, ready to serve.

Of course, I think the sauce itself has multiple uses depending on how much sweet flavor you add compared to how much heat. I can totally see you Hungry Minions experimenting with other spices, such as Harissa or even a mild Masala.

Just remember… when you cook it yourself and control exactly what you want in your food, you are truly making food fun again for yourself and your family.

*Note: I learned about the reasons why meat will stick to a stainless steel surface, unless you use butter. Butter is an emulsifier that will fill in the tiny grooves in the pan’s surface; oil will not. But since this community has so many dairy-free people, we’re doing the oil, and you should know that this will cause some of the meat skin to stick to the pan unless you try the below options.

Options: You could use lard or bacon grease to minimize sticking, and a little goes a long way. You can also use paper towels to get as much of the moisture off the chicken drummettes before searing, which really does help. And finally, you can take the drummettes out of the refrigerator before you wish to start cooking, and let it come closer room temperature. This prevents the meat from contracting and tightening, which tends to overcook the outside too quickly.

In the Instant Pot, place a small amount of oil* instead of butter in the bottom of the liner and press the Saute setting. When the oil is hot, sear the chicken,  turning the drummettes every few minutes until lightly browned on all sides (about five minutes). Remove the chicken to a plate.

Place water or chicken stock in the InstantPot liner and place the rack at the bottom. Return the chicken to the rack, seal the InstantPot lid for pressure cooking, and cook at high pressure on Manual setting for about 9 minutes. Do a quick release when it is finished.

While the Instant Pot is cooking the chicken, place all the other ingredients except the arrowroot flour (hold until later) in a saucepan on medium heat, making sure it is well combined. The sauce should not be thick because it has no emulsifier or starch in it; the heat will keep the ingredients looking like a thin marinade. Remove from heat.

When the chicken is done in the InstantPot, dip each drummette in the marinade and place on a wire rack on a drip pan. Place the broiling pan in the oven and broil for 7-8 minutes. If they do not appear browned enough, broil 2-3 minutes longer. Remove from oven.

Top the drummettes or wings with chopped parsley, and serve with carrot and celery sticks or other raw vegetables. Instead of Ranch style dressing, you can serve the veggies with fork-mashed avocado, or make your own simple dressing from a mixture of olive oil, Rice vinegar, your favorite mustard (check the ingredients for your food allergens!), and if you want sweet, use honey or maple syrup.