Learn how easy it is to make your own Sweet Potato toaster (or toaster oven) Sandwich (bread free), Photo credit: Imei Hsu.

When you get a diagnosis of a food allergy, multiple food allergies, and/or a medical condition that improves with the removal of gluten and other grains, soy, corn, and milk dairy, it’s pretty natural to become not only hungry, but also angry (aka “hangry”). You become hangry because you don’t get to eat the familiar, tasty, and convenient foods that you see all around you. Suddenly, these popular foods sing their songs of exuberance:

“I am so tasty, you want me more than sex, money, or power!”

These foods jeer too. “Ha ha,you can’t have me!”

Since the beginning, MyAllergyAdocate has been all about a lifestyle that holds naturally gluten-free foods that are also free of the main food allergens at the center, and foods that can be adapted to be compliant with a number of different dietary plans designed for people who are fighting autoimmune disease and other chronic medical conditions. I am not about “phood”; I am about real food, for real people,

In waltzes a lovely idea from the Internets, this one from Los Angeles by a well-followed food blogger Kelsey Preciado, who wasn’t even thinking about this food community; she was just thinking about making a sandwich, and she had no bread in the house. She substituted slices of sweet potato, and instead of grilling it on the stove top or in the oven, she put them in her inexpensive Oster toaster, and voila! Within two cycles of toasting, she had a cute, grain-free sandwich that could potentially pack a wallop of nutrients. Taking to Instagram, she has the first date and time-stamped example of this new food trend, and so I’m giving credit where credit is due. Thank you, Kelsey! You’re awesomesauce!

That was in May 2016, and ever since, food bloggers and followers have been posting hundreds of variations of this easy-to-create mouthful sensation. And for us hangry, Hungry Minions, this is good news! We can take that basic idea and make it work for us too.

When shopping at your local grocery store, you may hear your produce department personnel tell you that yams always have white flesh, and sweet potatoes always have orange flesh. You may also hear that they are essentially interchangeable, although biologically different. Or you may get an, “I don’t know, let me check for you.”

To address just these three questions, I did a little fact checking:

In general, sweet potatoes provide more fiber, minerals, Vitamin A, and protein per gram than yams. And while I would not go as far as to say that yams aren’t as good for you, gram per gram sweet potatoes provide more nutrients. Both, however, are considered low fat foods and nutrient dense. If you would like a more detailed break down on the nutrition, check out this post on Livestrong. If you have a choice to buy one or the other, and they are priced similarly, you do the math: it makes more sense to buy the sweet potato.

White potatoes don’t even shine a candle to the nutritional wonders of sweet potatoes. Additionally, for those of you who need to stick to an anti-inflammatory diet such as the Autoimmune Protocol, a lower white carbohydrate diet, or a Paleo diet, white potatoes are verboten. And if, like me, you’ve become sensitive to Nightshades (along with peppers, tomatoes, and eggplant *sigh*), white potatoes are also not for you.

Move along. White Potatoes are not the spuds you are looking for. 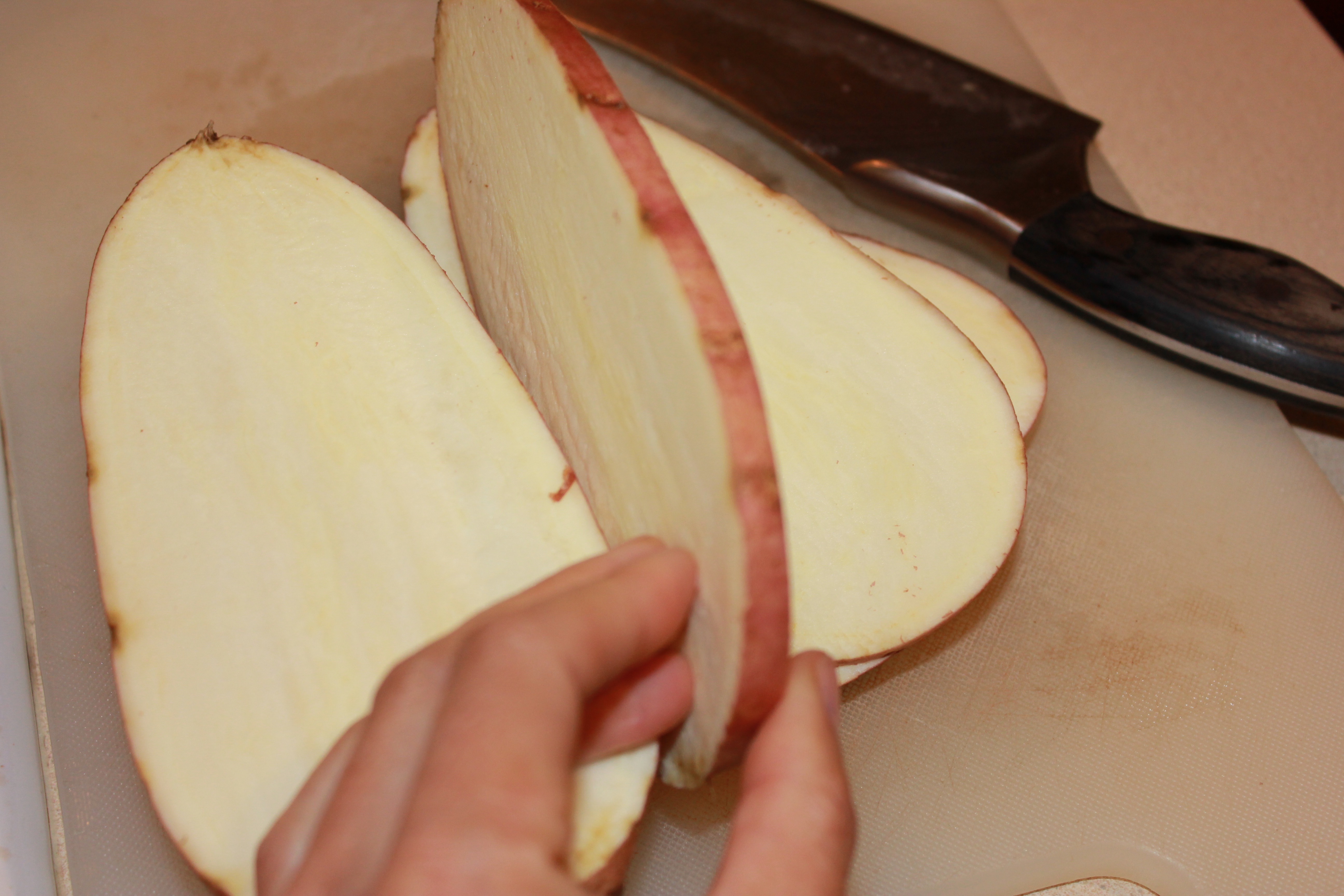 Slicing a yellow-fleshed sweet potato. I selected this one because it has larger, rounder surface to pile my ingredients. Photo credit: Imei Hsu

When making your sweet potato selection, look for a large size potato that is more round than long. By doing so, the slices near the middle will have the girth available to stack your ingredients.

However, if you want a more open-faced, baguette style, go for the shape that is a bit longer, tapering at both ends. You can then trim the ends and create your sammich shape to your own liking.

You want to slice each piece to approximately the width of one centimeter, which allows it to grill or toast quickly and evenly.

If you have Celiac Disease and share a household with someone who eats regular toast, your first step is to secure your own gluten-free toaster or toaster oven. I personally like the toaster oven because it has a door. Your food goes in, and it never comes in contact with any of your restricted foods. Danger averted, problem solved.

In our household, however, we had an additional challenge. I tried to use our Proctor-Silex toaster oven and broiler to toast the sweet potato slices. However, my husband pointed out that it is neither a good toaster, nor is it a good broiler; it executes neither one of these functions perfectly. Why it is still sitting on the counter taking up precious real estate is a question that will have to be answered after he finishes his big A-race for the season next weekend.  On the toast cycle, it took over six cycles to get the slices anywhere near toasted, and on the broil cycle, it never heated up high enough to grill it either. I can’t advise against the Proctor-Silex toaster oven and broiler anymore strongly than to say it was a big cup of “Nope.” 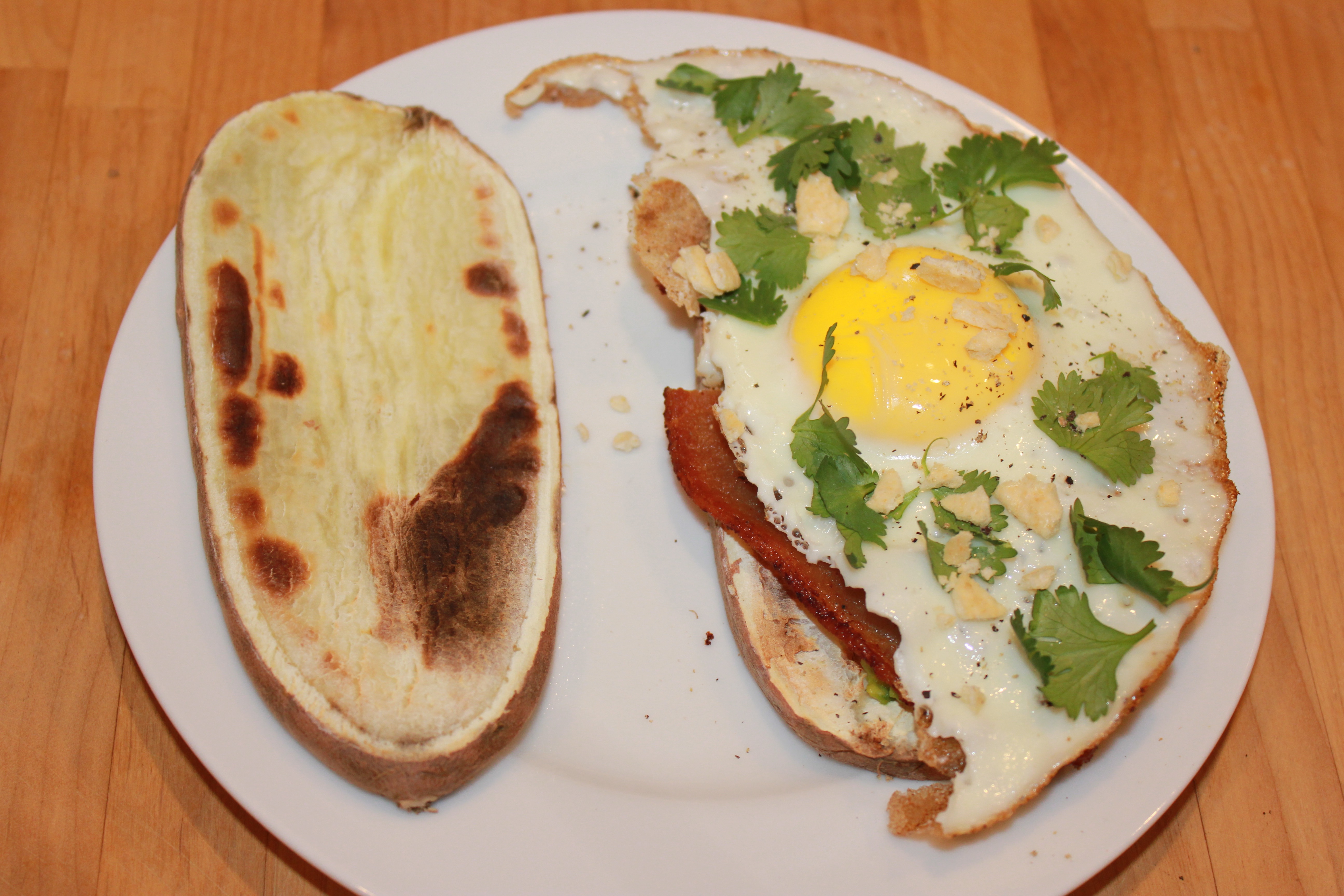 This rendition of sweet potato toast was actually cooked in a conventional oven, first on high heat, and then finished on low broil.

Next, we tried grilling them in a conventional oven, which of course, worked just fine. So this is your “fail safe” way of producing grilled sweet potato. Crank that oven hot, slide them in on a baking sheet, and even broil them, but watch out. They cook fast, so I started with 425F for five minutes, and finished them on low broil for just a few minutes. It did the trick, and it wasn’t very pretty to my standards.

My final solution, which I actually like the most, was to use a panini grill pan on the stove top. Within five minutes on medium heat, I had sweet potato slices with grill lines on them, perfectly cooked all the way through. I don’t know about you, but part of the appeal of all things grilled bread that I miss the most are those adorable grill lines. They declare to the world, “I have just been grilled! There is fire! Eat me, now!”

Well, at least you know WHY I titled this post as “Sweet Potato Toaster and Grilled Sammish” instead of “toasted” or “toaster”; it wasn’t exactly accurate. And yes, it moves further away from Kelsey’s original intent of trying to make the process as convenient as throwing a Pop-Tart in your toaster.

At the same time, you are special. Maybe you don’t have a gluten-free toaster in your home just yet (we don’t, since I don’t eat bread). Maybe you have a crap-tastic toaster oven (or not, of which, man alive, fire that baby up and use it!). If you have a panini grill, or you have a working oven, you have at least two other ways to jump on this food trend and make food fun again by joining in!

Now it’s time to pick your ingredients. Check out this article via Huffington Post for a bunch of lovely photos of toasted sweet potato sandwiches on Instagram. 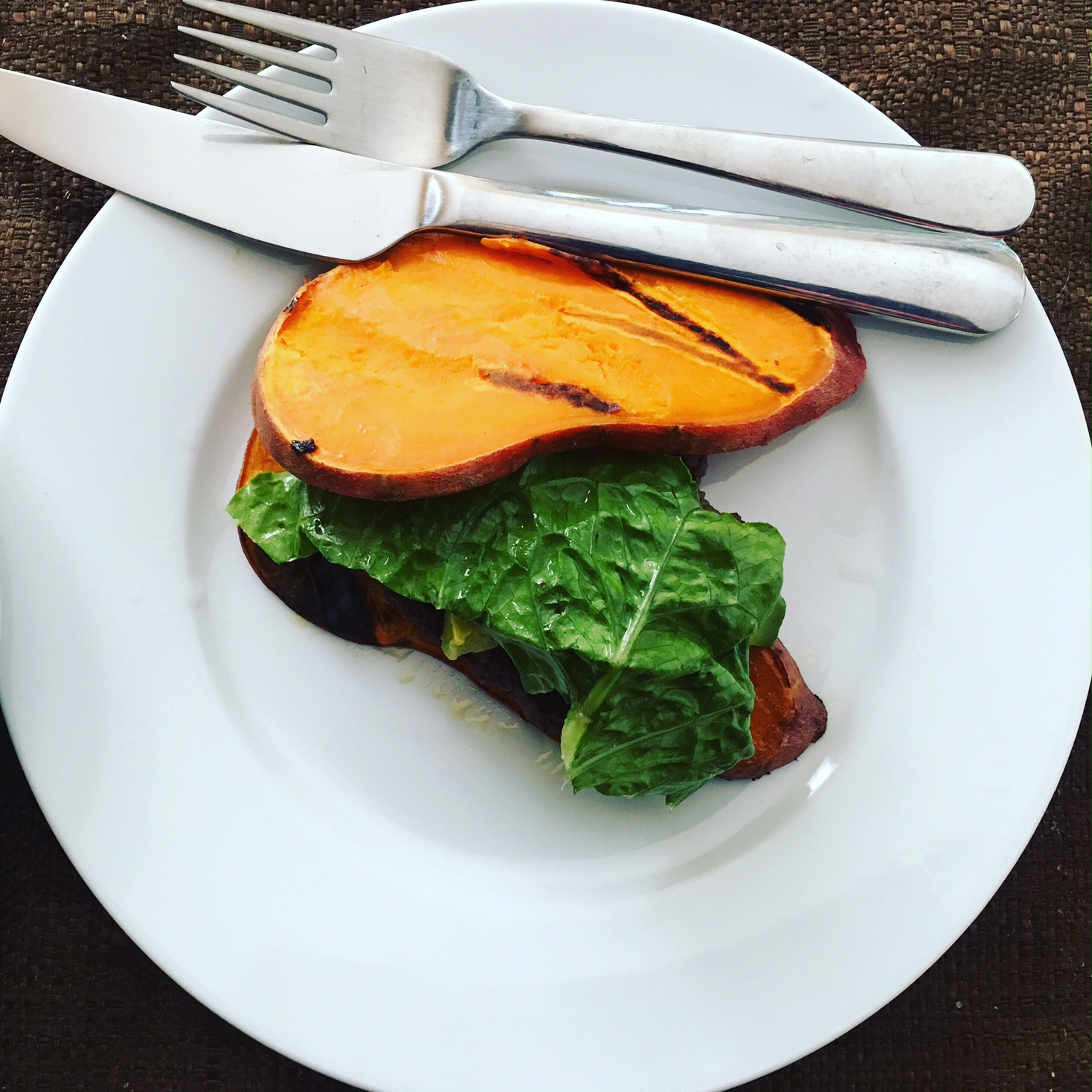 This one was grilled on a panini pan. Bison burger, bacon, goat cheese, and kale leaf. Photo credit: Imei Hsu.

Roasted beets and cucumber slices, with cilantro or fennel garnish

You can see that there are no end of nutrient-dense options. By batch cooking at the beginning of your week, you can just pull out pieces of pre-cooked foods, reheat, and stack them on your grilled sweet potato slices.

I hope you’ll have fun trying out some of the combinations I posted above, or just grabbing what you’ve got in the refrigerator and creating something new to you. Please post what you made on my Instagram account, so I can give you a High Five!