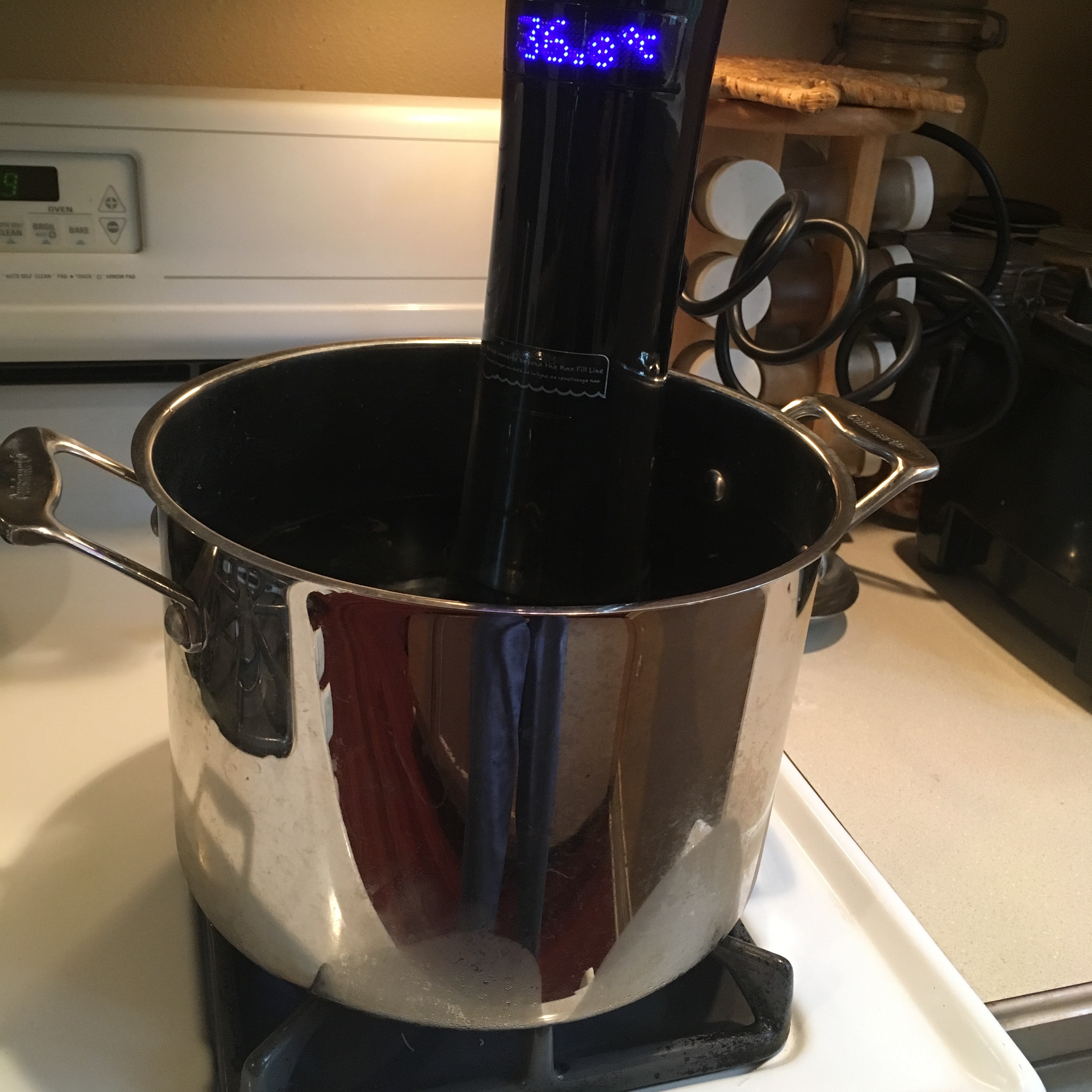 Sous vide cooking is back in vogue. Circulating water at precise temperatures allows you to cook food to perfection, with little risk of overcooking. Like my sweat pants (reflection)?

I became interested in Sous-Vide cooking last year at the International Food Bloggers Conference in Seattle (October 2015). A dark-colored liquid in a sample bottle was in my swag bag, labeled, “Steak Aging Sauce.”

The word, “Steak” was enough to grab my attention. I never say “no” to a good steak, and in my condition as a person with Celiac Disease and multiple food allergies, I am constantly in need of eating nutrient-dense foods, as I am on the thin side of the weight equation (although I am working very hard to rectify this, as I write this post).

In my household, M grills the steaks. Why? Because M is the Grill Master, I am not. Not that I haven’t grilled a steak or two in my life — I’ve even managed to smoke a ham and a small turkey in a smoker grill — it’s just that I’m not very good at it. That’s not just my opinion; M also has told me I have “issues” with my “mise en place,” as well as getting all foods cooked and on the table at the same time.  I often over-grill things, either in my belief that it takes far longer to cook than it actually does, or when my patience wears thin after I’ve poked the meat a half dozen times, and the juices are still looking as red as my favorite color of Chanel nail color.

After IFBC, M watched me dump out the contents of the conference swag bag on the floor, and when I wondered aloud how the “steak” sauce could be used, he stated two important points:

“What exactly is sous-vide anyway?” I asked.

The rest of this post is about why the Sansaire Sous Vide Circulator is one of my favorite things. Sous-vide, simply sous-vide.

What is Sous-Vide, Anyway?

Doing a little Internet searching, sous-vide cooking, it appears that sous-vide cooking had a two-step discovery process. Step One was by Sir Benjamin Thompson in 1799 using an air temperature method, and by American and French engineers in the mid-1960’s using a water bath method. When placing food inside of a water-tight container or vacuum-sealed bag, a precisely set water temperature cooks the food by surrounding it. The effect is a perfectly cooked food regardless of its shape or thickness, and in contrast to high-heat cooking from a conventional oven or a grill, it’s very difficult to overcook. 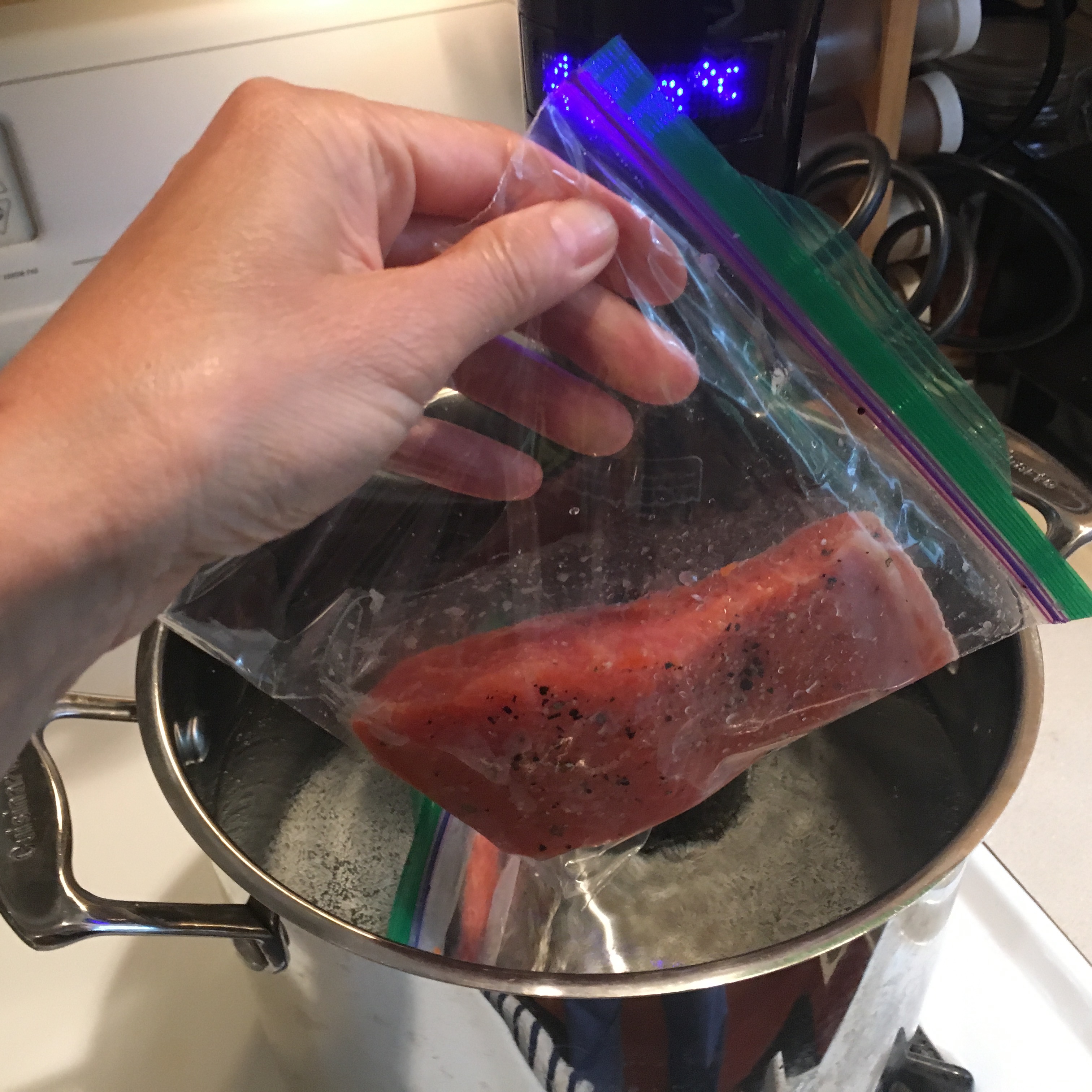 A piece of marinated salmon about to be placed in a water bath after the immersion circulator has indicated it has reached the right temperature.

Today’s sous-vide immersion circulator looks like a wand-like base with a built in thermometer, a clip to secure it in a large water bath pot, and a power cord. You can use heavy duty Ziplock style bags (the ones used for freezing food) as long as you remove the air before sealing it,  because the temperature of the water is not so high as to off-gas the plastic; however, some people prefer to use either heavy-duty vacuum seal bags only, or use glass containers with a sealable lid. Using a Ziploc is not advisable for sous-vide cooking that lasts longer than four hours (the minimum amount of time at 131F to reach pasteurization).

The main food safety issues involved in cooking sous-vide is to make sure the food has achieved a minimum temperature of 131F (see above reasoning), or that at whatever temperature called for, you eat the food within four hours.

The Sansaire Sous-Vide circulator has an easy-to-read digital display of temperature in both Celsius and Fahrenheit, and the large clip on the back makes it easy to secure to a pot. You should also know that these units are quiet. Unlike when boiling things on a stove top, you don’t hear water boiling; the temperatures are lower. You can reach your hand inside the water for long enough to move things around without worrying about scalding your hand.

Other methods for immersion involve pouring golf balls on top of the food to keep bags immersed, since they can otherwise float, especially if you’re not using a vaccum-sealed bag or container.. I have personally used a large ceramic mug filled with water to hold bags of food below the water surface. My preferred method of cooking is placing a small amount of meat inside a glass jar and sealing it tightly. No need for plastic bags.

The outcome of cooking food in a water bath is a perfectly cooked piece of fish, meat, poached egg, or vegetables. Better yet, the moisture of the food is retained. You will never have a dry piece of food with sous-vide cooking. Never, never, never!

But that’s just Step One.

What About the Charbroil Effect?

What is it that we love about the panini grill? It’s those diagonal lines across the bread, declaring to the eater, “I HAVE BEEN GRILLED!” You can’t paint those babies on. They are grilled. Or they are not grilled.

The beauty of modern sous-vide in the home is the flame finish, which is achieved in Step 2. After placing a small amount of butter on the meat (or not, if you are dairy free), the chef uses a small torch and carefully flame “grills” the outside of the meat just long enough to give it that lovely charbroiled finish without going too far. You should see a nice browned finish with this method.

With the meat held between tongs in one hand, and the torch in the other, I’ll often keep the flame in place and turn the meat in the tongs slowly until I see a nice brown color forming. That’s all it takes, as you don’t want to undo what you’ve done by overcooking. You can also place the meat on a wood cutting board and direct the torch on all sides, flipping it when you’re ready to sear the underside.

I’ve achieved a lovely effect when using a brown marinade base, such as coconut aminos. Here’s where the Sansaire Steak Aging Sauce sample makes some sense, even though I can’t actually have any because of the ingredients. It gives the meat a nice brown color, similar to when you cook meat on a hot grill. And according to the description, it gives steak a flavor of being slow aged. I can’t attest to it, but that’s what it says.

As I mentioned in M’s statement, I did have to check the ingredients before use, and as expected, it isn’t something I can have. Some of you may be able to try a small amount of Liquid Smoke, though it too has a couple of ingredients that might not work for you.

I had no idea how pleasurable it felt to finish the meat using a torch. Maybe this has something to do with all those hours I used to watch my sister play around with a Bic lighter when we were kids. Maybe… nah. Nothing to do with that. Like many others, I am fascinated with fire, and I have come to understand that fire became an essential part of cooking as soon as humans understood what it could do to make foods safe to eat and water clean to drink.

Sous-Vide and the Food Sensitive Household 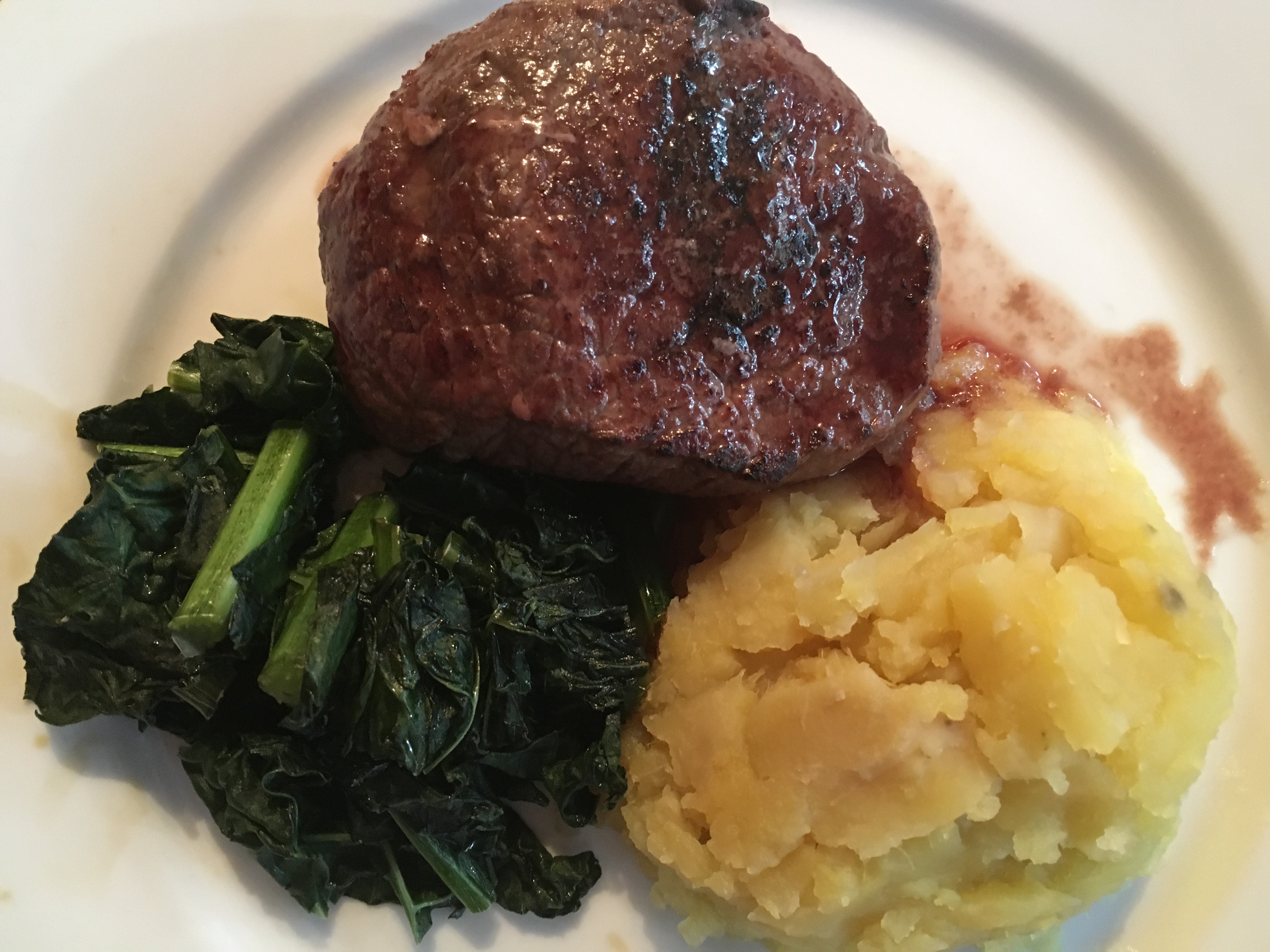 One of the features of sous-vide cooking that should appeal to the food sensitive household is the ability to customize food according to the taste and needs of the various eaters at your table. One kid wants plain, another kid is experimenting with chili peppers, a guest wants a marinade that includes gluten, and you would like yours with allium-free curry powder. How would you keep all those separate on your grill and oven? The cross contamination risk can be High!

With sous-vide, you can prepare each piece of meat or serving of chopped vegetable separately, marinading inside of the pouch, and marking the bag with the name of the person. When it comes time to make the meal, you fix it to-the-plate, so that the food does not touch any other surface than the plate that is individually served. If you use nitrile gloves, just change gloves between plates. Voila!

You can go one step further and use plate chargers in bright or decadent colors, and assign a color per person. For example, Kid #1 always get a blue charger, so his plate is placed on the blue charger; Kid #2 gets a red charger (for his love of red chili peppers!), Guest #1 is assigned a gold charger, and yours either has no charger or a decorated silver charger that says, “I am allergic to everything, yahoo!”

Create your own system. Just make it a system where there is no way to screw it up.  Unless, you suddenly become color blind. Make it simple. Make it easy.

There are cookbooks on sous-vide cooking that give you precise temperatures and time ranges to cook meats, vegetable, fish, and eggs, along with tasty marinades. Most immersion circulators will come with a few tips on getting started, so you don’t need a cookbook right away. Also, if you Google “sous-vide” + the type of food you wish to cook, there are usually a few good recipes available. I am about to invest in my first sous-vide cookbook, as I wish to delve a bit further in the art of the water bath for my food.

On a final note, the makers of Instant Pot sent me a press release the other day, as they too have released a new product. The ACCU SV800 Immersion Circulator is currently on Amazon since Sept 17, 2016, for a reasonable price as far as sous-vide goes. While I’m very happy with my Sansaire Sous Vide circulator, the new InstantPot brand circulator is worth checking out.

Happy Eating, to my Hungry Minions!