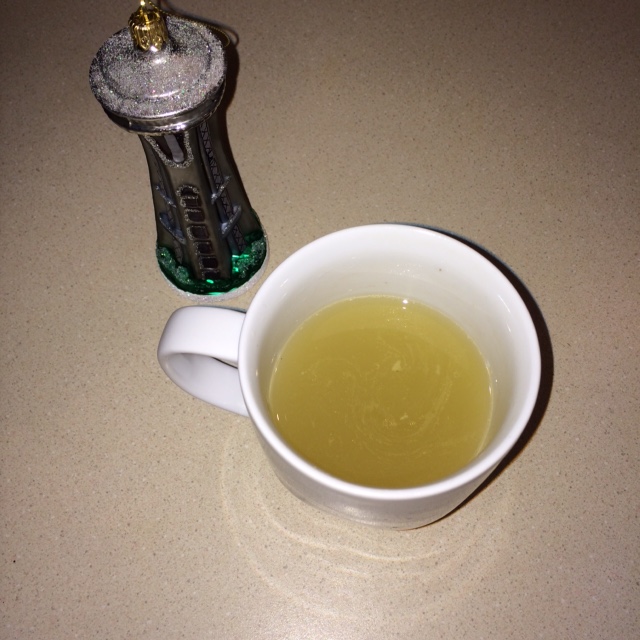 Bone Broth is easy to make, nutritious, and is often used to heal the gut. How stories of my great grandmother’s bone broth during wartime influenced this Celiac to cook bone broth today.

Some years ago, my mother told me a story from her early childhood in China. On December 8, 1949 the Chinese Nationalists departed to Taiwan and moved their capitol there as Mao Zedong’s army chased the Nationalists to the coast. Prior to that perilous journey by train to the port and by small boat to the island of Taiwan, my mother described traumatic scenes of war and starvation in the Second Japan-Sino war,  stories which in and of themselves speak loudly as to why she rarely spoke of them.

One of those stories is, of course, about food. My mother’s grandmother managed to purchase and cook simple food for her four grandchildren, including soup bones. My mother described how Grandmother would cook the bones in water for hours, carefully suck out all the marrow, extracting as many nutrients as possible, and feed all of it to the grandchildren. To this day, my mother remains firmly convinced that her Grandmother is in part responsible for keeping them physically alive; without that bone broth, they might have suffered and starved.

While I never met my great grandmother, her story of sacrifice and wisdom lives on with me. In my kitchen, there is a large pot of bone broth which I have slow cooked for over 24 hours. This simple process of making bone broth kept my mother alive, and there is no coincidence that bone broth is doing the same thing for me as a person with Celiac Disease.

I experienced damage to my small intestine over the years before the disease was diagnosed and learned to removed gluten and other food allergens from my diet. To heal my gut, however, I needed to learn to seek foods that were nutrient dense, digestible, free from my multiple food allergies and intolerances, and could actually heal the gut permeability that kept me in a vicious cycle of “Grumpy Tummy” — a complaining, cramping, prone to diarrhea, weak intestinal lining.

Last year after an accidental gluten exposure left me weak and unable to eat food for a few days, I sought bone broth as that “first food” to test whether or not my guts were ready for anything more than water and weak tea. My husband purchased several boxes of a name brand of broth and soup stock, and I greedily slurped down a cup, only to surprise myself with yet more diarrhea, cramping, nausea, and fatigue. Only one of them was a pure bone broth. Too weak to cook for myself,  I just stopped eating, and focused on hydration.

Looking back, the reason why my guts rejected those cartons of  bone broth  is because they had added alliums to the stock. I didn’t know that I was reactive to alliums. I have since learned that the best and safest bone broth you can eat to heal your guts is the one that you make at home. And it’s never been easier. 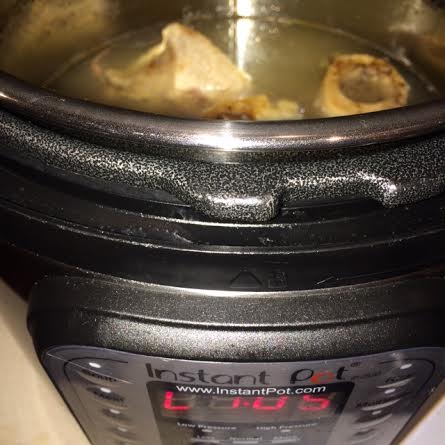 Cook Time: 10 hours for first cook time, up to 24 hours on a single batch

Filtered water (to the fill line of the slow cooker or InstantPot), about 3 quarts

2-3 tablespoons of vinegar (I use Apple Cider Vinegar)

The key to the best bone broth is really in the selection of the bones themselves. Pay a little extra if you need to, buy them online and shipped frozen if you can’t find it locally, and do what you need to do get high quality bones from a reputable seller.

Place the bones, bouquet, filtered water, and vinegar into the Instant Pot or your slow cooker, and allow it to cook for ten hours. You can have a cup and salt it for taste after the first ten hours, and add more water to the fill line again. I slow-cook the same batch with more water up to three times. Make sure you don’t fill the water past the fill line!

If you are regularly cooking meats with the bone in, start a freezer safe bag  and place the bones for future use to make bone broth. You may want to write “bone broth” on the outside of the bag as a reminder to its purpose, and place this on a list of revolving food recipes you make for batch cooking days. Rotate this recipe into your cooking schedule by planning to cook it about once every 2-3 weeks.

When bone broth is cooled and placed in a container in the refrigerator or freezer, it should have a solid layer on the top. It should look like gelatin, because essentially, that is what it is!

This bone broth can be used in a number of other dishes, such as risotto, or recipes that call for a soup base or bouillon cube.

Sixty-six years after the Nationalists left for Taiwan, I am thinking of the great grandmother I never met, and the bone broth that helped to keep the family alive in order to make that journey.

There are more stories to tell, but for now, when you enjoy a cup of bone broth in your kitchen, I hope you’ll appreciate the healing qualities of bone broth, all the way down to your guts.

Ready to take the 7-day Cook at Home/ Eat In Challenge? Join us, and I’ll send you a small digital gift when you complete your challenge.